Neelkantha Varnee was proceeding towards JagannathaPuri from Kapilashrama. On his way he came to a village. There was a small Ramaji Temple owned by a Bawaji [Mandicant]. Varnee stayed there. In the evening, after the Aarati [Evening worship] there was a Katha [Lecture on scriptures]. The mendicant was lecturing to the assembled men and women folk of the town. The Katha was over, the women went to the mendicant to fall at his feet. They went on falling at his feet and pressing his feet [a gesture of reverence] simultaneously.

On seeing this, Varneeji said to the Bawaji, “O Bawaji, you are a Sadhu why do you touch women? This is really surprising.” On hearing this, the followers of Bawaji got angry with Varnee. They said, “Oh you chap, what do you know about religion ? Do you slander us because we allowed you to stay here? Get out at once. Otherwise we will kill you. We are not afraid of the king. On the other hand, the king is afraid of us.”

Varnee saw that the place was not suitable for him to stay any more, and at once left the temple. He went to a nearby Bania's shop and sat there. The Bavaji roared, “What a coward !” But Hanumanji of the Ramaji Temple is always active. He thought, “What a ridiculous thing it is! The seeker of truth suffers and the follower of wrong path enjoys! Why am I for ? He took up a wooden club and with it began to beat Bawaji and his followers They shouted for help. Hanumanji said, “You drove away the person who was capable of saving you. Now who is going to save you?” Saying thus, Hanumanji started again to beat them.

The mendicants who believed that the king had been afraid of them, were so much frightened that they ran to Varnee for help. They fell at his feet and craved for mercy. They brought Varnee honourably to the temple. Then and then only Hanumanji's club silenced. 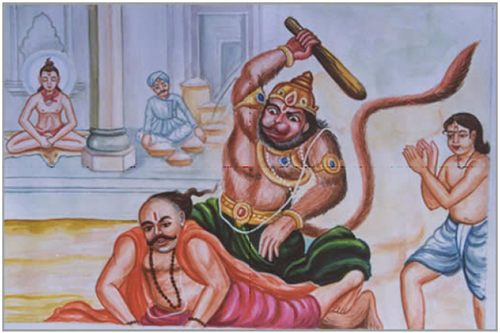