Machhiat is a small village in Saurashtra. There lived a Brahmin boy named Muljee. His mind was bent towards saints right from his childhood. So he became a sadhu in young age. He was named as Mukundananda. People called him Muljee Brahmachari. Muljee Brahmachari became Shriji Maharaj's disciple on the very first Dharshan of Maharaj. He always stayed with Maharaj and served Maharaj constantly day and night.Could you imagine the way he served? If he be asked to jump from height, he would unhesitatingly fall down. If he was asked to die, he would readily do it.

Once Maharaj was camping in Vadtal. He was holding a meeting in the courtyard of the temple. Muljee Brahmchari was standing high up in the way of pradakshina for some work. All of a sudden Maharaj shouted, “Brahmachari, a glass of water.”

On hearing this command, Brahmachari jumped down from that great height and brought the glass of water to Maharaj. Maharaj lovingly scolded him, “Brahmachari should you jump like that ? Think what would have happened if your legs or hands had been broken?” “Maharaj, I will be late if I step down. There you are to protect me”, came the reply from Brahamachari.

Brahmachari went away from there and stopped at a village called Dabhan sixty miles away from Maharaj. There he spent the whole day in Satsang and meditating Maharaj. He did not take any tasty food. Coarse and ordinary food was his staple food. Therefore his body was too much reduced. Months passed away thus, summer set in mangoes began to ripe. The devotees of Dabhan said, “Brahmachari, mangoes are juicy and sweet, better offer them to Maharaj”. “Yes, indeed they are”, replied Brahmachari. “May we give you a basketful of them? and you can take them to Maharaj”, said the devotees. “I am prepared”, accepted Brahmchari.

The devotees gave him a basket full of mangoes. Its weight was exactly a maund and a half (thirty kilos). The devotees put the basket on Brahmacahri's head. And Brahmachari started for Gadhada. It was a distance of sixty miles. It was scorching heat of summer. The earth was like a fire place. He had no shoes on his feet. His body was very thin and yet he carried a burden of heavy weight on his head. Brahmachari began to cut this distance by Shriji Maharaj's name in his

heart and on the tip of tongue. After many days he reached Gadhada. There he put the basket down before Maharaj and he fell prostrate at Maharaj's feet. He said “This is offering sent by the devotees of Dabhan”.

Maharaj did not utter a single word. He did not even look at Bramachari. There were tears in the eyes of Brahmachari. Gloom covered his face. Brahmachari went outside and sat down. A woman saw Bramachari. She said “Oh Bramachari, you are not seen nowadays. Where do you put up nowadays?”“As per Maharaj's command” said Brahmachari. “What command?” asked the woman. Now Brahmachari had to narrate what had gone on between him and Maharaj. On hearing this, the woman directly rushed to Maharaj and began to scol him. “Why have you become so cruel towards Brahmachari? This poor Brahmachari does not eat or drink. He has come here carrying a heavy basket with a load of 30 kilos all the while walking sixty miles, barefooted. And you don't even look at him. How can this be tolerated?” “It can be. Call Brahmachari,” Maharaj said smilingly.

The woman went out and returned with Brahmachari. Maharaj got up and embraced Brahmachari. He sanctioned and confirmed him in his service. Brahmachari crushed the mango and took out mango juice from it. He served it to Maharaj. Maharaj ate it and gave it to Brahmachari. It was now clear that Maharaj was not angry with Brahmachari. But he wanted to show by putting Brahmachari on the acid-test, the real qualities of a real disciple.

Attached and gentleness are required in a man who wants to serve. A man of hesitating or indicisive nature will not do in service. Maharaj himself, in Ahmedabad Prakarana of VACHANAMRIT, has said about this, “Proud servant, a disciple, is never liked by a master. Hence, it is only by the real servant who follows the wishes of his master”. On hearing this, Shuk Muni said, “Maharaj, how can a man without discretion and understanding please his master by following his masters wishes?”

Shuk Muni was indirectly hinting at the truth that a disciple, a servant is expected at last to have discretion and understanding.

welfare. Once Mahraj told in the gathering. “Brahmachari, please address the gathering today”. It was Maharaj's command. Brahmachari stood up. He started speaking with clapings, “O my dear Vaishnavas, please hear. Never faulter in obeying Maharaj's order, because what Maharaj is at present was not to be found in the past and will never be found in coming years. Therefore, my dear friends, please listen to me. Never hesitate to carry out Maharaj's order because Maharaj.....” Thus Brahmachari went on repeating the same words. He did it because Maharaj told him to speak.

Maharaj smiled and asked him to sit down. Maharaj said, “Did you all notice? The point is in the fist of Brahmachari. This is the main thing”. Maharaj, in the SHIKSHAPATRI, has enumerated a few devoted, vowing perpetual abstinence and chastity Brahmacharis and Muljee Brahmachari is one of them. This tells much of Muljee Brahmachari is a brilliant star among the galaxy of saints of Swaminarayan Sampradaya. 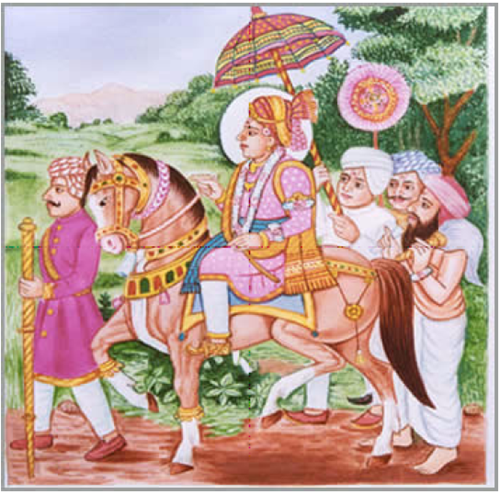