The Most Precious Gift

There was a Brahmin. He was very poor and old. He went on errand and earned his livelihood by that. He would live his life with poor food. He liked to have Darshan of Maharaj, but how can he go there empty-handed? Once he got an errand-work of a distant village. He had to go twenty miles to and It was summer. He had no shoes to put on. He completed this errand even by undergoing hardships. He got a rupee for that. All his clothes - dhoti, kediyu and a turban - were completely torn and they could be poorly patched up. To him everything else was second to Maharaj.

At that time Maharaj was in Loya village. He was holding a meeting. Brahman arrived there and stood at a far end of the meeting, and started to find out the knots of a torn turban. Knots were many, not one. In one such knot he had tied the coin of a rupee. After hard struggle, he found out the knot and untied it with great difficulty. He took out the rupee and held it tightly in his fist. It was to be offered to Maharaj, but how to go ahead in the meeting of the great. Maharaj saw Brahmin's confusion before anybody could know it. He addressed the meeting, “Please give way, Bhagat is coming.” The audience was surprised, “Who could be such a great person as Maharaj orders us to give him way?” They saw an old, poor Brahmin! The brahmin came forward timidly step by step.

Maharaj got up, and went forward and stood raising his hand. The brahmin put the rupee-coin in his hand, and fell prostrate at Maharaj's feet. Tears of joy rolled down the cheeks of the Brahmin. He was very happy, that Maharaj, himself, had accepted the Brahmin's offering! Was this an ordinary favour? Maharaj supported him and raised him up from the ground. The old Brahmin was shivering in the body. Within a wink of an eye, Maharaj surveyed the Brahmin's appearance completely. Maharaj lovingly told him, “Bhagat, why this gift to me? You should have purchased your clothes - dhoti, kediyu, and a turban.”

The Brahmin said, “Maharaj, how long am I to live! I could pull on torn clothes and will continue to do so, but when am I going to get a chance of offering to you? It is worth living today.” Maharaj was pleased, put his hands on Brahmin's shoulder and said, “You have given me the most precious gift.” Muktananda Swami was present in the meeting. Maharaj looked at him and said, “Swami, tell me, does this old Brahmin require to do anything now?” Muktananda replied, “No, nothing.” It was brahmin fulfillment of life

God is pleased even when offered water, a leaf, a fruit, or a flower by a poor man, because God is the greatest. God is easily pleased like a king who gives away a small village to a person who writes a eulogy on him. 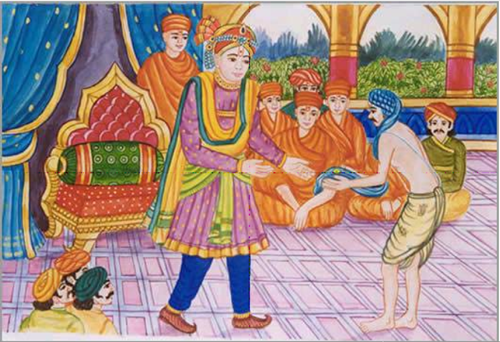